Please Note:  Some shows may have a cover charge or ticket fee. Please follow artist/ venue links for complete information.

Where has this week gone! I can't believe it's Friday already, but I know you guys are ready to cut loose and have some fun so let's see what's on the list for this week

Where ever you go, Have Fun but keep it safe!
Country Blessings!
Kelly

Today, I want to share with you an awesome event coming up Sunday October 14th in Wichita Falls TX. This Texas Music Cares event is going to be a blow out of some of the best talent around... all for a good cause! If it's one thing Texans know how to do it's GIVE. Based on the FB notes I'm getting from promoter, Chris Weathers, the donations for auction items as well as scheduled performers has exceeded anything they expected for the event.

The mission statement for the organization states: "to support and promote Texas musicians while also aiding non-profit organizations."  They are about helping musicians get their music out there so they can build a fan base. All while giving something back to this amazing community that supports the Texas music heritage.

I hope to have more details for you next week. In the mean time, I hope you'll check out the TMC website (link in first paragraph) and on FB at Texas Music Cares Benefit page.

Country Blessings
Kelly
Posted by Kelly at 9:17 AM No comments:

Out of the Chute - Arabella Jones 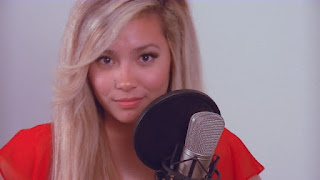 I feel so honored to have interviewed today's guest. If you haven't heard the name Arabella Jones, you are in for a sweet surprise. I won't spoil all the fun. Instead, I'll let you hear what Arabella has to say about her passion for music and then I encourage you to check out her YouTube videos and her website. While you're cruising her sites, make sure you follow her on FB and Twitter. She is just amazing!

Born and raised in Houston, Texas, Arabella has been studying guitar since the age of 10. She discovered her love for singing when she joined her middle school choir. In 2011, she began vocal training professionally to become a country music artist. She performs mostly cover tunes. Some of her favorite artists include Carrie Underwood, Martina McBride, Miranda Lambert, Dolly Parton, Jason Aldean, and Johnny Cash. She has fans from all over the world, including over 19,000 YouTube subscribers! She has recently begun writing her own material. Arabella says, “I'm really thankful for all of the encouragement that I've received from my family, friends, teachers, and fans. Without them, I wouldn't have gotten to where I am!”  xoxoxoxHere's a little bit about this talented young artist:


Congratulations on signing with TateMusicGroup. How long have you been singing and performing professionally?
Thank you! I started seriously singing and pursuing a career about a year and a half ago. I got a later start than most musicians, but I've come so far since then, I couldn't be prouder.

You’re a Texas girl. Had you looked into the management options in the Texas community before deciding to sign with Tate out of OK? What was it about them that caught your attention?
Actually, my record deal with Tate does not include management, so my dad is pretty much still my manager! We joke that he's the 'dadager.' :) I've made it incredibly far without official management, and I'm pretty proud of that! But, with our hopes of  really taking my career to the next level, we've decided to start looking into options in Nashville, soon.

You admire both Carrie Underwood and Miranda Lambert. What was it about Carrie’s song that you chose it over other songs for your Teen Hoot competition video?
Carrie Underwood is musically my idol, no question. “Good Girl” was such a hot new song, and I loved it, so it was the perfect choice!

How would you describe the genre of music you perform?
Definitely country/pop. My style is fresh, energetic, and real. One of my biggest goals is to always give listeners a feel of my personality.

You’ve been writing your own material for about a year. What do you find to be the hardest part of the process?
The hardest part of writing songs, for me, is being able to open up, and tell people all my thoughts, out loud. Especially as a teenage girl, I guess, we get so used to being judged. So, it's such a vulnerable moment when you just throw your emotions out there, and it takes a lot of getting used to. But, being able to write my own situations and perspectives into songs, makes it worth it for me.

Every concert features an opening act. Who would you like to open for?
I would love to open up for Taylor Swift, because she has a crazy supportive fan base!

You’re newly signed, working on your first album and you’re already doing interviews as well as having a HUGE twitter and FB following. What keeps you grounded?
I've honestly always just felt like a normal person. I have to deal with all the same things every day people have to, and I think that's what keeps my grounded.

Having a vision of where you are going and having a Goal is important. Where do you see yourself in five years?
Headlining my own tour!!! If not sooner ;)

Thanks for joining me today, Arabella. It was a pleasure. I look forward to chatting with you more in the future and watching your climb.

Now that you've met Arabella, head on over to her WEBSITE where you'll find links to all of her other social media locations and be hear clips from her music.

Meant to post these last night and give you a little more notice but storms through the St. Louis area kept the internet down at the hotel. So here we go!

One very important thing before I close today...

Have you pre-ordered your  new album from Dimitri's Rail? If not, why not? Check out the link to get a sneak peak at the first 6 tracks.

They are offering up some extra goodies to the first 100 Pre-orders:
# Your name listed on the website
# FREE download of bonus - Back to You
# Your name listed in the liner notes of the album
# Exclusive 1st 'invite only' look at the new video
# Signed album

Wow! Good stuff! Don't miss your chance to pick up these extra perks on what promises to be an AWESOME album! Dimitri's Rail Pre-order

I'll be reviewing the album as soon as it's released. So stay tuned!

Out of the Chute!

Just a quick note to let you know the in-laws are gone and I'm getting back to work. No guest this week. However, next week I'll be introducing you to Arabella Jones. If you've not heard this extremely talented young lady, you are in for a treat!

Country Blessings!
Kelly
Posted by Kelly at 5:42 PM No comments:

Need something to get through the week?

It has been just crazy here the past week while I fast-cleaned the house before my in-laws arrived. Note, I did NOT say 'deep cleaned'. But that's where my time has been. They are here. Mom and I are sharing the dining room table to work on respective projects so I'm not losing too much work time during their visit.

Rather than the usual post today I thought I'd share a couple of events you might want to catch this week.
If you're in the Fredricksburg TX area tonight - Thomas Michael Riley will be at Hondo's on Main starting around 7:30. It's a going away party for Mark Foshee. A final bash among friends before Mark moves to Georgia.

Tomorrow night, head on over to Llano TX where my good friends W.C. Jameson and Mike Blakely will be  performing at the Badu House from 8-10 p.m. They will be joined by legendary performer Terri Hendrix and  award-winning record producer Lloyd Maines.

Lastly, if you're in the Forth Worth area on Friday night, stop in at The Mule Pub to catch Randy Brown with special guest Steve Helms. They'll be playing from 9:30p.m.-12:30.

Party Hard, Be Safe, Have Fun and..
Country Blessings!
Kelly
Posted by Kelly at 3:28 PM No comments: