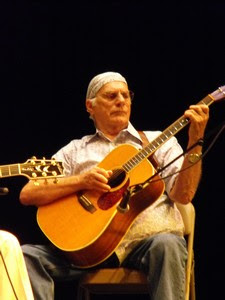 Over the course of my time in the music arena, I’ve had the opportunity to meet some of the legends. Until a couple weeks ago, the highlight of my list was the great Faron Young. That was before I heard the musical talent of Eddie Adcock.
I went down to the Ozark Folk Center in Mountain View Arkansas without a clue as to what to expect. I hadn’t done my research on thumb picking. What I did know was that Buddy Case can play a guitar like nobody’s business. Or so I thought. It was Buddy that drew me to OFC, it was Eddie Adcock who left me with a lasting impression of true bluegrass finger style.
Eddie Adcock was born in VA. There’s his first positive. I was first introduced to ‘traditional’ music in the back hills (and I’m talking Walton’s Mountain area) of the Blue Ridge. I could relate to where this man got his roots. Like most traditionalists, Eddie absorbed the seasonings of his talent by listening to the Grand Ole Opry, Wheeling Jamboree and the Old Dominion Barn Dance on the radio. He hung around the Scottsville's Victory Theater where the likes of the Carter Family and Hank Williams performed.
Having taught himself to play stringed instruments on the family farm near Charlottesville VA, practicing until his fingers bled, he’s played with some of the greats such as Mac Wiseman and Bill Monroe and the Blue Grass Boys. His break came when he joined The Country Gentlemen in 1959. The Country Gentlemen were a progressive band integrating the then popular folk music into the traditional bluegrass, attracting a younger audience.
As I sat in that auditorium I felt the awe from the other musicians on the stage with him. His playing, despite recent health issues, was amazing. Eddie’s wife, Martha, first noticed the tremors affecting his playing. Eddie was diagnosed with an ‘essential tremor’, an involuntary trembling in the head or hands that afflicts 10 million Americans. In 2008, he underwent surgery at Vanderbilt Medical Center in Nashville to correct the problem. As you’ll see from the YouTube video Here (courtesy of ABC News), Eddie was awake AND playing the banjo during the surgery to help the surgeons put the electrodes in the proper place.
Eddie says it still isn’t perfect. Something isn’t connecting right again but he’s still playing. Eddie Adcock can not NOT play. It’s who he is. He suggests beginning musicians get the basics down and then develop their own style. "Even if they play as well as someone like Earl Scruggs, they'll never be Earl Scruggs," he says. "Nothing's wrong with someone helping you get started. Then back off and let God give you your music." (quote from bluegrass-museum.org)
If you ever have the opportunity to hear this man play – GO! And if you are lucky enough to jam with him, know that you are in the presence of greatness and learn from the master.
Country Blessings
Posted by Kelly at 11:21 AM No comments:

What a beautiful trip down to Mt. View Arkansas last week. I drove in misty rain most of the way, enjoyed the coolness of the auditorium for a couple hours then made the three-hour trip back home in the drizzly rain. But I wouldn't have missed the time at the Ozark Folk Center for anything.
I wasn't able to meet up with Buddy Case and his wife, Karen. Sadly, Karen's mother passed away on Saturday so they were unable to attend the Thumb picking competition this year. My condolences to Karen and her family for their loss.
I did enjoy the jam session performance on Friday afternoon. It was a chance for some of the competitors to arrive and loosen up a bit before the weekend festivities got underway. I heard some unbelievable picking like I haven't heard in years. Legends such as Comer "Moon" Mullins, Eddie Adcock, Darryl Nixon and a young man by the name of Ben Hall made up the main jammers. They were accompanied by a 'washtub' picker whose name I didn't catch.
Thumb picking originated at the turn of the 20th Century and was made famous by Merle Travis and Chet Atkins. The basic concept uses one or two fingers to pick the lead notes on the strings while the thumb carries the base.
Posted by Kelly at 2:52 PM No comments:

I didn't mean to run out on everyone. My apologies. I was experiencing some internet issues and a living room remodel. Didn't need either right now but both proved to be for the best in the end. The living room looks awesome and I have my own High Speed internet at home. No more making a 80 mile round trip and 7 hours away from home to get caught up.
Speaking of getting caught up, I'll be back in here tomorrow to do some updates. On Friday I am going to Mt. View Arkansas to see a friend of mine, Buddy Case (we've showcased his talents here) compete in the National Thumbpicking Competition. I haven't seen Buddy and his wife, Karen, in over a year so I'm looking forward to the reunion and hearing him play. I'll have news of the event, with pics, on Monday.
Until tomorrow...
Country Blessings!
Posted by Kelly at 3:27 PM No comments:

Happy May everyone!
A lot of places across the midwest and southern states have been pounded with heavy rain and severe storms over the past couple of weeks. My little corner of south-central Missouri was no exception. Though we didn't get hit near as hard as a lot of places, it did rain almost continuously for seven days. Thunder and lightening were evident for what seemed 24/7... leaving 17" of rain in it's wake and me without a lot of internet time. No research, no writing, no email...
But the worst of the storms have passed (I hope) and I now have high speed internet at the house -no more boonies dial-up for this country angel! High speed all the time means I can better keep up with everything you guys are doing and report it a lot faster to my growing network of readers and (hopefully) your fans.
I have visitors coming in this week for an extended writers weekend. Then I'll be back to business - better than usual - beginning Monday morning.
In the mean time, check out your favorite artists over at MyTexasMusic and have a great long weekend! Oh, and don't forget... if you haven't made plans to attend Fandango yet, there's still time. All the information you need is in the previous post.
Country Blessings
The Country Angel
Posted by Kelly at 7:23 PM No comments: