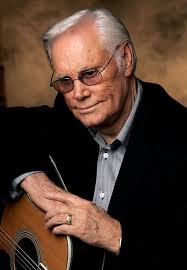 GEORGE JONES
1931-2013
“The Voice” of Country Music fell silent with the passing of the iconic legend, George Jones in Nashville at the age of 81. Long recognized as country music’s most indescribable voice by not only the fans, but critics in all genres, the music world continues to mourn the loss of its’ finest stylist, who was considered the greatest living country singer. ~ Georgejones.com

The Beginning:
George grew up with music in the family. His mother played the church piano and his father was an amateur guitarist. George got his first guitar at the age of nine and his first professional gig in his late teens playing on the radio in Jasper, TX. He was later signed to his first record label in 1954. Why Baby Why (co-written with Darrell Edwards) became his first national hit (though not  #1 – that went to White Lightnin’ in 1959) affording him the invitation to be a part of the Louisiana Hayride. He moved to the Grand Old Opry about 1956 – where his public memorial service will be held on Thursday May 2, 2013.

George’s voice was an instrument all it’s own and he played it like a maestro for almost sixty years. Whether singing his own material such as ‘Window Up Above’ or classics co-written with people such as Darrell Edwards, Billy Sherrill or Tammy Wynette, he put his personal brand on every word when he sang. George Jones received more than twenty awards from various industry categories recognizing his ability between 1959 and 1993. He joined the Walkway of Stars at the Country Music Hall of Fame in 1970 and was elected to that honored institution in 1992.

Even when George’s personal life was in turmoil, his music was a constant. Being dubbed ‘no show Jones’ became more of an endearment than a dis to the one man who, despite the ebb and flow of this crazy business, stayed true to his country style. George Jones never tried to be anyone except who he was. You either loved him or you didn’t, the latter category being a spec of sand on the popularity beach.

My favorite George Jones song has always been 'He Stopped Loving Her Today'. (YouTube link courtesy of The Ronnie Prophet Show) I’ve watched his career for years and like many of you, I saw the ups and downs, the crashes and burns he experienced throughout his life. I truly believe George Jones became the man he was meant to be when he met his wife, Nancy in 1983. Though not a ‘quick fix’ to his long list of problems, she was the rock he needed as the turbulent seas of his personal issues searched for a calm. It is said No man is an island. We all need that one person in our life that makes us complete. My heart and prayers go out to Nancy and their blended family during this time.

Friday afternoon I received a text from my sister… she quoted lines from ‘Who’s Gonna Fill Their Shoes?’ (George's performance)  then...  George Jones Dead at 81. I got a chill as I recalled my interview with Bill Anderson recently and how I had referenced those same words. Here's a link to the actual Music Video when the song was released. You can see the depth of emotion in his face as if he truly pondered the question. Those epic words were written by Troy Seals and the late Max. D. Barnes.

As we grow older, we are faced with our own mortality. I find myself searching daily for ways to connect with people like Bill Anderson and George Jones – to talk to them, hear their stories. The people who provided me with country music roots.

I’m sure our parents felt the same way as they watched their music and screen idols leave this earth. Did they often wonder who would ever be as great as the ones they grew up with? Their answer came in the form of the classic artists we now begin to say goodbye to. My fervent prayer is that our current generation of artists strive to leave a legacy as great as those who have come before them. Strive to be your own person while holding tight to the tradition that brought you here. YOU are the ones who are going to fill their shoes. Please make sure they fit.