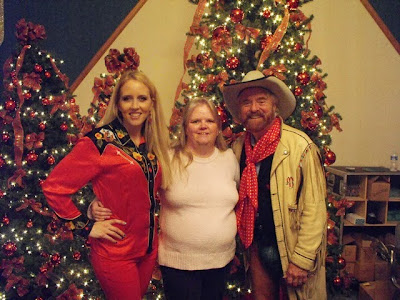 Christmas came early for this country girl last night when I had the opportunity to attend the
'Christmas Cowboy - Michael Martin Murphey Christmas show at the Meramec Music Theatre in Steelville MO. 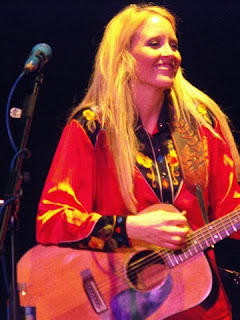 I have been networking with Texas singer/ songwriter Pauline Reese since I began this blog but never had the opportunity to meet her in person. When I found out Pauline would be performing a short two-hour drive from me I gave her a shout and she arranged everything. Mind you, I did not recall until after contacting her that Michael Martin Murphey was the headliner. That was the bonus in my stocking. 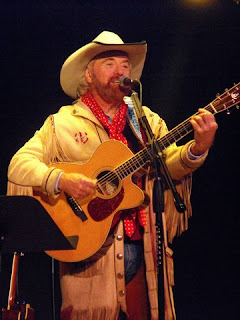 Murph has taken Pauline under his wing and she has been touring with him for the past several weeks. He is also producing her next album... which she will be in the studio with Willie Nelson on December 4th to work on one of the tracks. 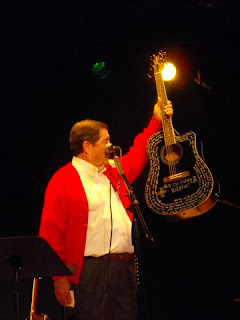 Aside from an AWESOME show with these talented folks, a guitar was auctioned off with the proceeds going to the Fiona Rose Charity... a charity close to Murph's heart, raising money and awareness for childhood bone diseases. The guitar, donated by Murph, had the words to Wildfire written on the face.
The guitar went for $3000, the winning bid of Bob Brinkman, though he passed the guitar to the 2nd highest bidder, David Greene.


So many people played a part in making this evening magical for me but my biggest hug of all goes to my
friend, Pauline. Her only request was that I pay it forward. Not a problem.

We are all blessed with something. The question is what can you do to share your blessing? What will you do to brighten someone's day? Think of something. Then DO IT! Afterwards, leave me a comment as to what you did. There just might be something extra in YOUR Christmas stocking this year.