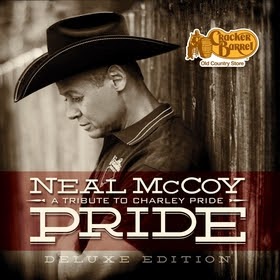 As someone who grew up listening to Charlie Pride, I was excited for the opportunity to review this tribute CD by Neal McCoy. I’ve been a fan of his from the beginning. The fact they are both from Texas sweetens the deal for me. I was not disappointed… and neither will you. This CD is everything you expect and more.

Although the original was released in September 2014, the album re-released November 3rd through Cracker Barrel Old Country Stores- a BONUS CD that includes two tracks (Let Me Live and Why Baby Why) not available on the original release! Opening with Is Anyone Goin’ to San Antone, the thirteen tracks span a section of his career from 1966-1983. I was happy to hear his first #1 – Just Between You and Me among the tracks Neal McCoy included.

Charlie Pride was a mentor early in Neal McCoy’s career (1981) and their families have been close ever since. You can hear Charlie Pride in each song Neal sings on this CD. He has made each song his own while keeping the Charlie Pride sound we fell in love with almost fifty years ago! Although I am surprised so much time had to pass before a tribute was recorded, I think they were just waiting for the right person for the project. Neal McCoy is that person.

While this is Neal’s baby, Darius Rucker (Kiss An Angel Good Mornin’), Raul Malo (I’m Just Me) and Trace Adkin (Roll On Mississippi) pair well with what Neal was after. To make the sound complete, Producer Garth Fundis was an integral part in this album having been present back when some of these songs were originally recorded. His input is the bow on top of this package, perfect for any Christmas stocking.

You can purchase your copy through this  Cracker Barrel purchase link