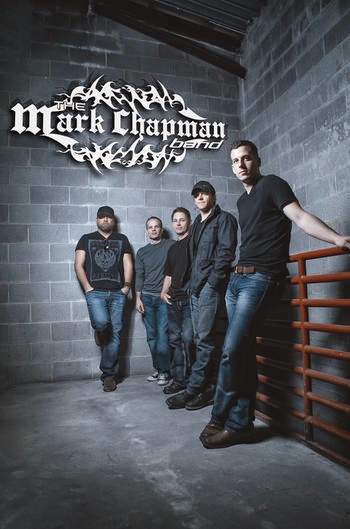 I'm using a stock photo for this as I do not have any good shots from the night I saw the Mark Chapman Band. However, when you go to their website, there are some great photos others have done. But even better, get on their MCB Crazies newsletter list and know when they will be in your area and check them out LIVE!

Seriously, you NEED to hear these guys in person. As cool as their cds are, they put on one heck of a show. And while I'm not big on all the 'showmanship' in a concert (I'm more an acoustics kind of gal), their show is great! And their fans are a testament to the fact.

I saw Mark Chapman Band for the first time at the Seymour Missouri Apple Festival last September. You would think for the middle of September the weather would be picture perfect for fall. Not that night. Not even close. It was beyond cold. People sat in lawn chairs huddled in blankets -OVER their coats. Hats, scarves were a necessity and you could see your breath. But as cold as the weather was, the street was packed to watch these guys perform... for almost FOUR hours! You heard me. They did not start until 7 p.m. if I remember correctly so you can imagine if people started the evening out bundled up how much colder the temperatures got as the evening progressed. But that did not deter anyone from enjoying the amazing performance by The Mark Chapman Band.

Here's just a sample of what you can expect at a show:

Their tour dates are lining up for the 2015 season. So go check them out.. just pack for that odd snowfall in April ;-)