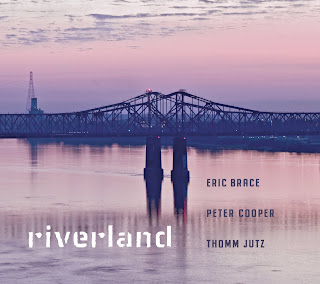 RIVERLAND, the sophomore album from Eric Brace, Peter Cooper and Thomm Jutz is a true piece of Americana music.

This album hits close to home for me. As I write this review, my husband, a riverboat captain, has been gone for three weeks. He will likely be out another two. He has been on the river for thirty-seven years. With the exception of a short stint on the Arkansas, he has always worked on the Upper Illinois/ canals. But no matter what river you’re on, there’s a bond. The work is hard, the weather can be harsh and the water unforgivable. Still, there are men like my husband who can’t imagine working anywhere else. You are either a river rat or you’re a lander.

There is a magic in this album. From the step off into River City to Mississippi, Rest My Soul you’ll find yourself caught up in the picturesque view of the boats making their way along the Mississippi River. You’ll feel the weariness of the crew stepping back on land after a long twelve hours (or more) of back-breaking labor hauling lines and torquing wrenches. You’ll understand why the Captain seldom takes off his shades. The sun’s glare reflecting off the rippling water – directly into his line of sight as he stresses over the safety of his crew while making time up… time lost due to hitches like a lock delay, ice or fog shut out.

All rivers carry their own story but the Mississippi is special. From stories of survival passed down through generations, to its place in the Civil War. This river has seen racial strife from slavery to segregation. Brace, Cooper and Jutz, with the help of some friends bear the river’s soul on fourteen tracks.

I’ve always believed an album should have a core that, like the hub, that the individual tracks feed from. RIVERLAND has a core the stories and reminiscences radiate from, allowing the tunes to roll seamlessly from one to the other, flowing much smoother than the river they embody.

Two tracks have a flavor of their own. Southern Mule will have you tapping your toes while Old Tom T (Hall) and Brother Will D. (Campbell) tells the story of a friendship most of us never knew about. Thomm provides the voice for Tom T. Hall and Peter walks in the voice of Will D. Campbell

I’ve listened to this CD at least twice a day since opening up the album. Part of the time I’m missing my husband, but then I’m reminded his job, in a lot of ways, is much easier than of river men past. The dangers are still there but like others before him and those that ride the river today, he works hard on a job a lot of men can’t handle to make a living for us. 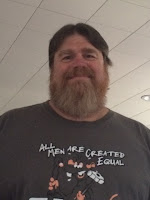 Today, I dedicate this review to my husband, Captain Bob Henkins of the Illinois Michigan Oil company and the deckhands who entrust their safety to him every time they fire up the engines.
To all the men and women out on the rivers… Be Safe.

This is an album that belongs on the 2019 Best list, for sure. I'm tipping my hat: 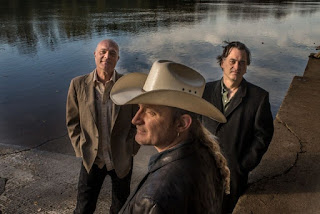