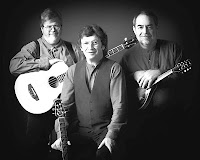 As soon as I read the nominees for Entertainer of the Year, I knew the competition was one of the stiffest in recent years. You only have to see the name Shake Russell. Even folks like me who are fresh to Texas music have heard his name. In some circles it’s spoken almost with a reverence. Shake isn’t new to the scene. For thirty years this man has been pouring his heart and soul into his music, sharing his passion and keeping it true. You might not know him as a performer but chances are you’ve heard his musings interpreted by Clint Black, Jessi Coulter and Ricky Skaggs.

This isn’t his first time in this category and it probably won’t be his last. Shake won Entertainer of the Year in 2004. He is also nominated in Vocal Duo or Group of the Year as part of the Shake Russell Trio.

You have only to listen to any cut on his recent CD, ‘What This Heart Holds’, to understand why he’s been around so long. The sound might be ‘fresh’ by some standards but every note still rings true to the type of musician and songwriter Shake Russell is. With each note you hear the people who influenced his sound. Legends such as John Lennon, Cat Stevens and Bob Dylan.

Like those who have come before him, lighting his path, Shake isn’t done by any stretch of the imagination. Shake Russell’s talent won't fade away like a wisp of smoke from a campfire. That’s why he’s among the best in the Entertainer of the Year category… and why I saved him for my final spotlight.