Out of the Chute with Mike Blakely 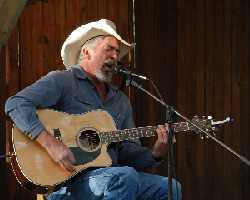 A little about Mike:
He’s “just plain brilliant,” according to John M. Greenberg, singer/songwriter and Blakely’s friend of 13 years. “…He is as gifted of a novelist as he is a songwriter.”

At age 52, Mike Blakely has written 16 novels and released 11 albums of original TexAmericana music. Blakely draws on his own experiences, other people’s stories, or even just the twist of a phrase to fuel his songwriting. Mike, who plays guitar and mandolin, says he finds inspiration in all kinds of places.

Blakely grew up in Wharton County, Texas, where he learned the cowboy ways. These days, on his Seven Stars Ranch in Llano County (which is for sale if anyone is looking), Blakely still clings to his country roots. He has always wanted to live in the country, have his own place, be his own boss, and hunt and fish. “I’m living the dream,” he said. “And I get to do two things I love to do to make a living.”

This was the Tenth Anniversary for the Texas Music Awards. You first appeared on the nomination list in 2005 for Vocal Group of the Year with The Whiskey Traders. You’ve since been nominated in a variety of other categories for other collaborations as well as a single artist, including  your fourth nomination for Entertainer of the Year. Last year you were presented with the ‘My Texan Award’. What does it mean to you to be involved with the Texas music community and the Academy?

It’s always an honor to be recognized with a nomination by the Academy. As for the Texas music community, it has given me some of my favorite moments in life, and introduced me to some of my very best friends.

When I interviewed you last, I asked about your musical influences. You listed people like Marty Robbins and John Hiatt. What is it about their music that influences you?

I liked Marty’s western flare as a writer, and of course his golden voice. John Hiatt has an inventive songwriting style that appeals to me. Anyone who can get away with rhyming “Queen of Sheba” with “amoeba” in a song earns my admiration!

You are not only known as a talented musician but for your writing, as well. You have several westerns, including Summer of Pearls which won the 2001 Spur Award, a non-fiction: Forever Texas- The Way Those Who Wrote It Lived It, the collaboration with Willie Nelson – A Tale Out of Luck and have a recipe in The Ultimate Chili Cookbook. You are due to release not one but two books this year.

The first is your collaboration with Kenny Rogers. Can you tell us a little about the book, ‘What Are the Chances?’


My co-write with Kenny is my first non-western novel.  It’s a music business story set in 1975.  It also has a gambling element, for obvious reasons.  Our fictional characters invent the Texas Hold ‘Em phenomenon.  There are several other plot lines, too.  I don’t want to spoil all the surprises.

Your other book to look for soon is called ‘The Pounders’. What is it about?


It was great fun to write a non-western about being in a band.  So much so that as soon as I finished the collaboration with Kenny Rogers, I wrote my own novel about a band in the 70s.  It will be called “The Pounders.”  That’s also the name of the band in the novel.  It should be out in 2013, if everything stays on schedule.

Can you give us a sneak peek into your next writing project?
I am just now getting started on a big, historical novel about the Mexican War.  This will require a lot of research, but I’m glad to have the contract to write the book.

Thanks for joining me on Kelly’s Country today, Mike. I know you’re very busy and your time is sincerely appreciated.