REVIEW WEDNESDAY on Thursday - A Song To Die For - Mike Blakely 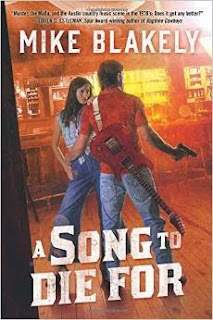 DISCLAIMER:
If you are a follower of KellysCounty, you know I have been friends with Mike Blakely for many years. However, when I review something I do give an unbiased opinion. My friends, more than anyone, expect nothing less from me. So without too much of a spoiler alert, here is my review of Mike’s latest book.


A SONG TO DIE FOR is a contemporary novel by Spur-Award winning author Mike Blakely. After having read most of his Western novels, including A TALE OUT OF LUCK, which he co-wrote with Willie Nelson, I looked forward to reading something different. An editor once told me ‘if you can write, you can write anything’. Mike Blakely proves this statement to be a solid truth. This is Mike's second contemporary novel. His first was What Are the Chances (co-written with Kenny Rogers).

As writers, we often hear, ‘write what you know’. Mike knows a bit about the music business. With eleven albums in his discography as well as having written or co-written songs recorded by other artists, he can tell you just about anything you want to know about the business. Mike Blakely came into this project well versed in his subject and that shows in every chapter.

Abbreviated BLURB:
It's 1975 and guitarist and singer/songwriter Creed Mason hopes to ride the new wave of Texas-style, Austin-based country music all the way back to the big time. A one-hit wonder whose Nashville career was cut short by a trip to Vietnam, Creed is desperate to get back into the business. His break arrives when a country legend, Luster Burnett, comes out of a fifteen-year retirement for one last album and tour in order to pay off a huge debt to the I.R.S. As Luster's new guitarist and band manager, Creed jumps at the chance of a lifetime.

Toss in the Las Vegas mob, a Texas Ranger, and an FBI agent.  The two plots move back and forth, each in their own lane before converging into a single climax that makes complete sense. As you read, you’ll notice traits in some of the characters parallel folks in real life.

I read an ‘unproofed’ copy and could not find a single flaw in the mechanics nor the storytelling – another testament to Mike Blakely’s ability as a writer. For the first time in a long time, I held a book in my hands that I hated to see end. Everything was tied up nicely but I did not want to let the characters go. I will remember Creed, Kathy and Luster for years to come. When you carry the characters with you long after you have closed the book, that is the sign of a well-crafted story.

Mike features one of his own songs in the book... Here's the video from YouTube

I am giving this book ….

You can connect with Mike Blakely:

Labels: A Song To Die For, Mike Blakely, Review Wednesday