TURNTABLE TUESDAY - The Outside Circle 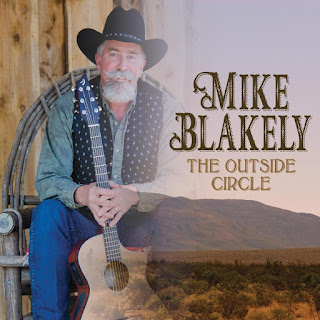 THE OUTSIDE CIRCLE, the thirteenth album from Mike Blakely, takes us on a true Western journey. With his iconic voice Mike treats us to track after track of Cowboy Americana, painting vivid pictures of a gone but not forgotten era. There’s just something about the cowboy life that calls to some part of us. Whether it’s making a hat your own, the way the leather of a saddle feels beneath you or the dust kicked up by a bronc in the rodeo arena there are memories we may or may not ever experience yet we feel as if they’ve been a part of our life.

While Mike has been writing about the western life both in song and fiction novels, he added a little extra spice to this album including three tracks co-written with a real-life cowboy, Damon Rogers. Rogers is a full-time cowboy, buckaroo and horse trainer.

As I listened to this album, I heard a lot of two previous CDs, RIDE THE RIVER and WEST OF YOU (Both Sold Out and no longer available). The first that caught my attention was The Hat Song.  Another, The Ballad of Josiah Wilbarger, had the undertones of The Last Comanche Moon (West Of You cd). There are two hidden tracks that make THE OUTSIDE CIRCLE stand out from Mike’s previous recordings.

While there are many talented musicians on THE OUTSIDE CIRCLE, such as Kurt Baumer (fiddle) Ray Rodriquez ( drums, percussion), Lloyd Maines (steel) as well as Mike Blakely and Walt Wilkins ( guitar) one of my favorites is Julie Carter (Cello) Her haunting opening on The Ballad of Josiah Wilbarger is a pleasant surprise that makes this CD complete.

As writers we often hear the term ‘voice’, meaning how an author strings words together that distinguishes his writing from other pen dancers. Mike Blakely is true to his voice in both songwriting and his novels. You know when you hear the tune or read the story, they were penned by the one and only Mike Blakely without having to see his name on a dust jacket or CD cover. The fact that he brought others on board that compliment his voice shows his true mastery. His textured voice is what keeps bringing me back to his music and his stories. The depth of his storytelling in any form will make you feel as if you are there.

Here's a video for the title track: 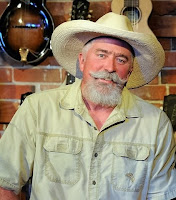 Vist Mike's Webpage or Facebook page to find out where you can catch a life performance.
Posted by Kelly at 12:23 PM