OUT OF THE CHUTE - Helene Cronin

Note: I love being introduced to artists that have been under my radar. Thanks to Adam Dawson at Broken Jukebox Media for bringing great talent my way.

Helene Cronin is one of those artists… one whose music I could put on a loop and just chill or sit at a campfire with and just listen to her. 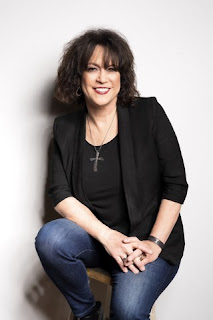 Thank you for joining me in KellysCountry today.

As I read over your OneSheet, I see some of your peers who describe your musical abilities better than I ever could. Let’s take a look at one:

“… Her ability to crawl within a subject and pull a story or emotion out the other end is what makes her a brilliant songwriter. Those writing chops delivered with those earthly vocals have made her one of the best artists I’ve heard in a long time.” ~ Terri Hendrix, Songwriter

1 – What was your initial emotional reaction when you read those words for the first time?
I was touched, and very grateful to Terri for this statement. She's a prolific, gifted songwriter and
an amazing musician and live performer. To have someone like Terri Hendrix say that I was one of the best artists she'd heard in a long time was very encouraging. Also, she focused on the songwriting, which I loved. Lyrics are what I've paid the most attention to over my career, so when another talented songwriter gets what I do, it means a lot!! Also I like that she said "earthy vocals"!! That made me smile!

2 – Fifteen years is a long time to write and perform for others. You spoke of an ‘awakening’. What clicked for you that moved you on the new path?
I've been traveling between Dallas and Nashville since 2004, writing for the commercial country market, along with everyone else who moves to Nashville! In 2008, I wrote a song called "Lucky Me" about a soldier I talked with at the airport. In 2010, we put a video of the song on YouTube. "Lucky Me" brought me a flurry of attention and mild success. It did a lot to renew my faith in myself as a writer. In 2014 I signed a publishing deal with a Nashville publisher and worked with her for the next 5 years writing with well-established writers  and up-and-coming artists. In 2014 and 2015, I put out 2 EPs in order to have product to sell at shows. So it's important to understand, that 15 years was not wasted time! I was honing my craft. I was doing what I loved!
As my publisher watched me perform my own songs, and as I grew into owning my artist career, it seemed like the right time to step things up! She suggested that I find a producer and do a full-length record.

My goal in releasing what I consider to be my first, serious artist project was to put together a well-thought-out body of work that was not just the audience favorites, or the songs that I thought would sell CDS, but the songs that represent who I am and what I want to say. Ultimately the hope is that this CD would increase my visibility, that it would lead to album cuts and writing appointments. But more than that, I hope to introduce myself to a bigger world and widen my audience. The "awakening" was beginning to believe my circle of writer-friends, who told me they loved my song delivery, my voice, my writing. And perhaps it was finally believing that I was worthy of spending time and money on a project like this, and that I was not crazy to hope for more.

3 – Your musical style cuts a wide swath through a variety of genres. Who were some of your influences as you began to develop the music of Helene Cronin?
That's an interesting question. I'm a mixture, sometimes too folk for country, too country for folk purists, a little rock, and to my surprise a little blues on this album. But here's my best attempt to explain it. My first instrument was piano, playing from 1st grade through college; it's where I learned music theory. Picked up guitar in 8th grade, playing everything on the radio. I did not care for what I thought was "too-twangy" country music. But in the mid-90s, I started listening to country and realized that's where the story-songs went - it was a genre where lyrics were king. I think I've been influenced more by songwriters than artistic styles. I just want to write GREAT lyrics. I want to make people cry and laugh and most of all FEEL. Because Nashville has a songwriter community like nowhere else in the world, when I'm in town, I go to shows and listen to great writers. Like all songwriters, I have my "go-to" grooves and style of playing, so I like finding new tools - chords, capos, tunings - to help me break out of my typical patterns.

4 – Mean Bone was co-written with your daughter, Alex. Have you written together before or plan to pair up again?
Alex is a fiction writer. She began writing novels in 6th grade and had the most disciplined daily practice of writing I've ever seen. By the time she graduated from high school, she'd completed 6 fantasy novels, in the world-building tradition of Tolkien, Gaiman and Wynne Jones. She now writes for a local magazine here in Plano, TX called "Local Profile". She currently has a manuscript placed with a literary agent in NYC who is shopping it to publishers!

I began writing songs in college, and never stopped even as our family was growing. My husband and kids were usually the first to hear new songs I'd written, so Alex grew up around songwriting! She understands songs. More than that, she understands story-telling and narrative. When she heard me working on Mean Bone, playing the bluesy feel I was experimenting with, she came downstairs and listened, suggesting a small edit. I said, "why don't you write it with me?". We had never written together before, but she contributed some key lines, and an important final point in the bridge of the song. I was a proud songwriter-mama!

5 – I love the perspective of a dead husband on Ghost. I write paranormal romance, so this one especially caught my attention. Where did this one come from?
My first co-write with Davis Corley had produced the song "Riding the Gray Line" (track 5) which I love. We scheduled a 2nd co-write in Oct. 2018. As we sat down and talked, Davis mentioned the idea of writing about a ghost. We had a blast talking about the character and his story, not sure yet where it would take us. Davis stepped outside to smoke and walked back in with the entire first verse. By the time we stopped for the day, we had what looked like 4 verse sections.

It was 2 months before we got back together. I mentioned a line that was bugging me and threw out an alternate idea: "It's best if she believes I'm beneath that dirt and stone". Davis loved that and in his brilliant way, made that a key part of each chorus section, changing it in the final tag to make the story heartbreaking, beautiful and sad all at the same time. It was amazing to get to the last few lines and see how the story had to end. We had not plotted it out in advance, but just let it unfold as we tried to solve problems and move the ghost through time. I love the song ending, but some people (including my husband!) are really bothered by it!

Because this song was completed in December and we had  tracked the band in November, it was not supposed to be included. But when I played it for my producer, Matt King, he said "that HAS to be on your record. Let's do it with just you and guitar." I played the guitar part all the way through in one pass, complete with buzzing strings and the creaking of the stool I sat on!

6 – You won New Folk award at the Kerrville Folk Festival in 2018. What advice would you give to others taking part in the festival for the first time?
The best thing you'll get from the festival is the relationships! Go to Kerrville to network, to make friends, not to win a contest. Of course, sing and play your best and good luck to everyone who enters! But Kerrville is like a family. Join the family. Play at the campfires. Stay in touch with your "class of" if you make it into the finals. It is an amazing, highly revered festival. Winning was wonderful, but good things happen for all who enter, not just those judged the "winners"! So have fun and don't take yourself too seriously!

7 – Speaking of first times… do you remember the first time you performed ‘professionally’ and would you share that experience?
The first time I remember getting up in front of a group to sing a solo I nervously decided to play guitar really loud and sing really soft. I was insecure about my voice. I can look back and smile at that kid. She had no idea she would grow to love speaking to people through songs, through stage fright, through fear, through crushing shyness, and would find strength, courage and empathetic audiences, just as hungry as she was for an authentic voice.

8 – If you wanted folks to know one thing about who Helene Cronin is, what would that be?
That I am a growing, developing, imperfect human being who absolutely LOVES to show up with my whole heart and tell stories in song; who is still shy, who writes from those deep messy places, but who also finds humor in life. Because of the surprising (to me!) way people respond to my writing, I hope to continue having a life where I can share my songs with others who are stumbling through it just like me.

I'll be reviewing Old Ghosts & Lost Causes tomorrow. In the mean time, here's a sample of one of the tracks from the album: