WEDNESDAY REVIEW - One Town Over

First off, thank you all for your patience yesterday. After a short nap I wound up being much more me and worked up til 9 p.m. on house projects.

If sleep eludes you or you just want to make sure you get a good night's sleep so you can function the next day I recommend Zzquil. 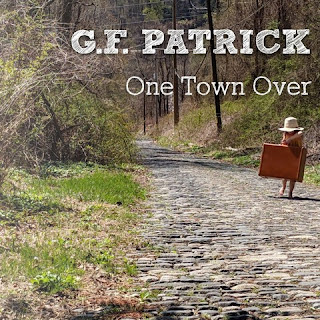 If ever there was a provacative CD on the market, it's ONE TOWN OVER. Patrick is a master storyteller that when you really listen to the lyrics, of its own violition your mind begins to process what he's telling you.

For ONE TOWN OVER you find yourself dissecting each song to discover what part of human nature and a life experience he's talking about.

One such track struck me was Refugee's Plea. Now, as a media representative I'm privy to some things including the story behind the song, or what was on the writer's mind. The piece GF shares on this track is this...
The idea that people living in a land of plenty have the right to tell someone else to stay in the hell we've helped build for them is infuriating. If we wouldn't trade places with someone, we shouldn't be so quick to send them back.

Talk about a poignant piece for this time we're in if ever there was one! I'll be sharing the video below, but let me finish this review.

G. F. Patrick has a true Americana voice. While it may at times have a monotone quality, that tone is used as a tool to carry you through the story. He doesn't try to be something he isn't except a guy with stories to share.

While most tracks meander like a slow-moving stream, we all know into every stream a bit of turbulance appears at some point. That turbulance in ONE TOWN OVER is Anger of Magdelene. This is a murderous ballad from the persepctive of a woman in charge. When I read the story behind the song I instantly thought of Goodby Earl by The Dixie Chicks. At some point a woman finally hits that point where she is either going to continue to be beat into the ground or stand up and take charge. Anger of Magdelene is that story.

Over all, ONE TOWN OVER is a stellar album from a talented storyteller who has been looking at life through an artists eye since he was five years old.

I invite you to listen to this album then look at the world around you with new eyes, to look beyond the curtain of hate and destruction to why it's there in the first place.

I'm giving ONE TOWN OVER:

You'll find G. F. Patrick on the following social media accounts and can purchase the album through his website STORE.

Here's the video I promised: