TURNTABLE TUESDAY - When I Think About Texas

I absolutely fell in love with 'When I Think About Texas' by Redneck Brown and the Freshwater Donkeys. The video for this tune is well crafted and speaks to the romantic in all of us. 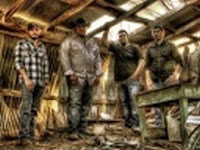 Redneck Brown and the Freshwater Donkeys are not new to the music scene. They've been together since 1996, honing their craft and waiting for that perfect moment. I think they've found it with this tribute to Texas.
Making up this hardworking family group is Rob Ybanez (Redneck Brown), Jamie Chandler, Shawn Gomez and Bryan Chandler. Although Rob is originally from Texas (would explain how his heart comes through in the lyrics), he now calls Guthrie OK home.

When I Think About Texas is their second single of their Red Dirt Blues album released in January. Following up their first release, 'All Cause of George Strait'  If you check out their Reverbnation page, you'll find five great tunes showcasing the range of this hot group.

The guys are busy on their Red Dirt Blues Tour. You will want to catch one of their shows. You can check out their tour schedule on the site as well as watching The Party List here in Kelly's Country.

Labels: Red Dirt, Redneck Brown and the Freshwater Donkeys, Turntable Tuesday, When I Think About Texas