OUT OF THE CHUTE - Nu-Blu

Today, we're stepping off the 8-seconds Q & A to do a Fast Five with a group I've featured before. 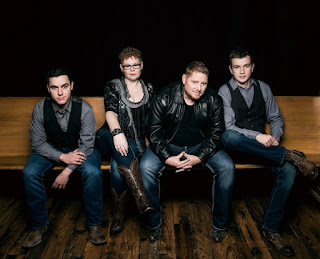 Tomorrow, their new CD - VAGABONDS will be on the Turntable Tuesday so I've focused the Fast Five on their newest project.

Vagabonds seems to have a bit more ‘travel’ in the pacing of the tunes, differing from
Your “All the Way” CD. Carolyn, I also know from our previous interview that you look
For songs that really hit you.  What was your first pick for Vagabonds and what about the tune spoke to you?

The first song pick was the title cut, "Gypsies on Parade". This song has been on my "must do" list since the first time I heard Sawyer Brown perform it way back in the eighties. When I heard it then, knowing how much they were on the road, it really touched me. Every CD Nu-Blu has ever recorded. "Gypsies on Parade" has been on the table. (I've kept it to myself because I've always been fearful that if another band heard it, they might beat me into the studio with it.) Now since spending in excess of 200 days a year on the road touring since going full time in 2011, the timing was finally right.

"Gypsies on Parade" is very emotional for me because, it's my life. I love what I do and am thankful for the opportunity to live this life I always dreamed about, but it can be very demanding, both physically and mentally. It is oftentimes very emotionally taxing having to be gone so much from family and friends.

This song is so close to my heart, that it is the only song I've ever cried on While in the studio cutting my vocals.

You teamed up with Jimmy Fortune on a single he co-wrote ‘Still Small Voice’. In a             Interview with Bluegrass Today, you spoke of what that song meant to you. Do you think people listen to that voice enough today? If not, what are some of the impacts we would see in our world today, if they did?

As they say, hindsight is 20/20. And of course each person can think of a place or choice they had to make in their life where they wish they would have listened to “that voice” or “a gut feeling.” I think that the biggest impact would be seen in a “pay it forward” fashion if more folks took the time to listen to that voice. Life is so busy and it seems we jump from one thing to the next so quickly, that if we just slow down and think it through, that we would realize many of the issues we face in life are in fact ones we create for ourselves.

What about this new album do you think is most representative of that quote?

Everything. We do hold traditional bluegrass close to our hearts, it’s what we love. That being said, good music is good music and a great song is a great song.   When we decide to record or perform a song, the decision isn’t based on whether it fits in the box or not. We decide based on how it fits us emotionally and by our fan feedback. How we treat that song is a decision made by simply listening to the song itself. It will tell you what it needs and doesn’t need, just don’t try and force it into a container that it doesn’t fit in. Some of our songs are bluegrass, some aren’t, and we are aware of that and will be the first to say it, but isn’t that the coolest thing about music? It just is, and without labels.

What makes Vagabonds different from anything you’ve done prior while still making it feel a part of the Nu-Blu family?

We feel that any band and their music are constantly shaped by the environment and people that they exist in and around. It’s no different for Nu-Blu. This album has been shaped by our life over the last couple years. Heavy touring, very little time at home, having to record parts of the album on the road, all this combined with. meeting folks from all over the world as we tour, learning from them, becoming friends and listening to their experiences. This all goes into the makeup of “Vagabonds’.

Daniel, a lot of the rise of Nu-Blu can be attributed to your attention to the businesses side of the band. What was the hardest part of ‘branding’ that you knew if you could just get that puzzle piece in place, Nu-Blu would be on its way to what you and the rest of the band knew it could be?

Well, any measure of success can never be attributed to one person. It’s taken a collective effort of current and past band members, an amazing team, lots of lost sleep, and yes, running the band as a business. That’s what it is. We exist in the business of music, and there’s as many sides to it as there are to any other business. I think that the largest challenge to “making it” in the music industry is the fact that music is something people do as a hobby and for fun as well. So that makes it much harder to separate and draw a line.

Think of it this way. If a person builds birdhouses for a hobby in the backyard and the occasional neighbor asks for one to be made as a gift, or even if that person makes a few on a weekend and sells them at a local craft fair. That’s one thing, but is that the person going to be the person that you get to build your house? No, of course not. It’s not that the talent isn’t equal or perhaps even greater on the hobbyists side, it’s more planning, permitting, and sometimes having the crew to get it done on a larger scale. That line is much more blurred inside of music, so branding is something that becomes even harder to do. There’s no magic puzzle piece, it’s having all the pieces, all at the same time working toward a common group of goals. As an artist, you have to trust your team.

We have the most talented folks working with us. I’m truly thankful everyday for them. For any artist that is struggling to “make it” the best advice I can give is set your goals, build a team and trust them to drive the train, and learn…learn all you can about the business side of music, oh, and that learning never stops…
Posted by Kelly at 9:00 AM

Labels: Fast Five, Jimmy Fortune, Nu-Blu, Out of the Chute