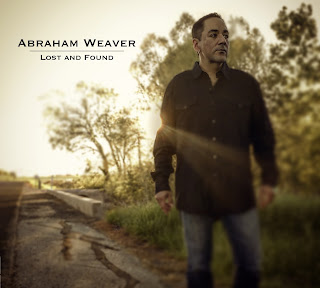 LOST AND FOUND is the new EP from Abraham Weaver. As Abraham told us yesterday, he brought in more instrumental than he used in his previous album, YOURS. When he told me he was doing more of a Texas country-rock album I was concerned. One of the things I loved most about YOURS was that I could hear Abraham's voice. So often, artists sacrifice the true beauty of an album by allowing instruments to overshadow their true talent.

Not the case with LOST AND FOUND. Abraham's soulful sound still comes through on every track. I can't say the instruments enhance his voice, but they do give the feel he was after.

I Know A Memory When I See One is a collaboration of Rick Orozco and Randy Goodrum. I'm not familiar with Randy but Rick Orozco is one of Abraham's songwriting heroes and friend. They worked together on YOURS. Bringing Rick in on this album in some form helped with the continuity between the two albums, giving the tracks to follow a natural flow.

Another pebble paving the way in keeping the Texas sound is songwriter Drew Womack (co-written with Tom Douglas). He's been called a 'magical songwriter' and he brings that something to Leaving October Behind.  If ever there was a perfect pair between songwriter and vocal artist, this song is the definition.

The country rock sound is evident on What's Going On (written by Abraham). the track almost has a Rick Springfield (Think Jesse's Girl) vibe that while not a true Texas train, lends to the over-all tone Abraham wanted.

When I do CD/ EP reviews I close my eyes and listen to each track. Some flow through me as a tune while others bring images to mind that would be perfect for a video. I see Abraham's soul portrayed in video on These Four Walls. I can picture him standing in an empty room of an older farmhouse, staring out the window. This song goes deep.

As Abraham told us yesterday, he saves his favorite tune for the last track. Lost and Found brings three talented songwriters together (Thom McHugh, John Nace, Westin Davis). This is another of those visual tracks. Light trailers of the cityscape/ lights of Austin zipping through in a flash. Searching.

Overall, LOST AND FOUND keeps the Texas real while attracting a more contemporary audience. For me, the music is about the artist and Abraham is helping to bridge that gap between the West Texas Americana I love and the Austin music scene I'm finding a new appreciation for.

To learn more about Abraham Weaver, purchase other products and see his Tour Schedule, check out his WEBSITE.  You'll also find him on TWITTER and FACEBOOK