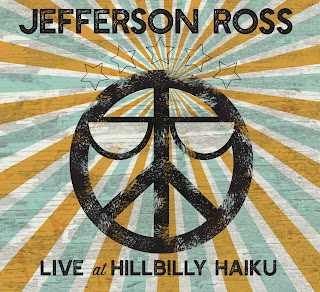 The album LIVE AT HILLBILLY HAIKU by Jefferson Ross is the epitome of what good songwriting should be. Jefferson's lyrical style stems from his Georgia roots. While most people associate Texas with the Americana genre in reality Americana, while regional, covers many areas of this country. Each region bringing their own ingredient to a melting pot genre.  His poetic style tells stories of everyday life - the life he's not just seen but experienced is further demonstrated by the venue he chose to record this live album. Hillbilly Haiku  is an intimate house concert setting where friends gather to hear talented artists, enjoy good food and just have a great social evening.

From Slap It On to Family Drama, and the single, The Soul is Made of Broken Things, he touches the soul of anyone listening.. Seriously, who puts Mr. Magoo and Deepak Chopra in the same song and makes it work? No wonder he's Trying Not To Lose His Mind!

House of the Lord is a unique piece on this album. There is a definitive nod to religion where Jefferson speaks more of who he is and what the phrase means to him. While spiritual in nature, the words are also thought-provoking... something every good song should be. The most poignant track of the fourteen is Isle of Hope. Much like Lee Brice's I Drive Your Truck or Luke Bryan's Drink A Beer, Isle of Hope is not so  much about the loss of a loved one but in the recovery of those left behind and how we choose to carry on told in Jefferson's laid back, almost reverent tone.

The ebb and flow of the tracks is formed in such a way that you don't stay melancholy for long. Just when he has you thinking deep, Jefferson pulls you back to the lighter side with something like 77 Lime Green Cadillac Hearse.

While I've only highlighted a few of the tracks on this CD I am in no way diminishing the others. The haunting tale of Confederate Jasmine, the unique way of describing a lost love in Yesterday's Paper, and his fingerpickin' style showcased on Dunwoody Train. Jefferson Ross sums everything up in his intro to Stories... "it's the stories that make our lives interesting.. that make us a civilization."

My sister, Kitty, A Crazy Lady's Retirement,  described his style as casual. She is right. His style is as casual and comfortable as sitting with a friend. Jefferson Ross' music is a breath of fresh air in not just Americana, but the music world overall. I look forward to meeting Jefferson Ross and experiencing his music. Until then, I'm tipping my hat:

To get a glimpse into why the hat count is so high, here's a video for you:


To check out Jefferson's previous albums, visit him on Amazon 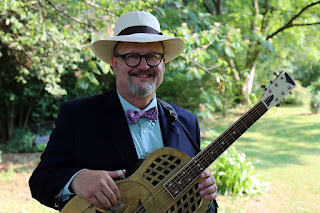