Technical issues (Thank you Windows 10 -not) prevented me from having this post ready yesterday.
Here we go!

Apologies for the misprint in the Subject line. 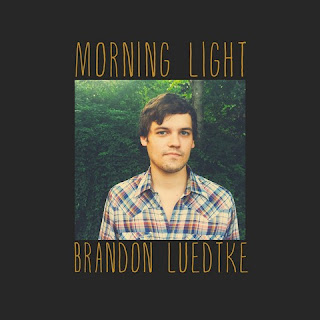 I'm not a fan of row houses and one of the things I really dislike about today's so-called 'country music' is that you can't distinguish one voice from another. Nashville thrives on formula and if you fit their mold, chances are you're going to get a record deal. But here's the thing... the ones that don't conform to the formula and do their thing are the ones that really make their mark in the music world.

MORNING LIGHT is the debut album from Brandon Luedtke. While this is his first LP, don't let that young face fool you. There are years of experience poured into every track and served with a rough vocal that adds that something different I look for in an artist.

Songwriting since the age of twelve, Brandon Luedtke has spent his life honing his skills as a true artist in the Folk/ Americana communities from NY to Austin and in between. Add in his first EP      ( Salient Sounds - 2014) and being awarded Best (Male) Singer/Songwriter at Viva Terlingua Festival later that year and you have a pretty good print of Brandon Luedtke - the artist.

Can't Get Away With the Way of the World cracks this album wide open with a toe-tapping tune that draws you to the campfire for a sing-a-long. The invitation continues through the remaining nine tracks. Each one adds a different ingredient to the LP without straying from a sound that is distinctively Luedtke.

If there's one take-away from MORNING LIGHT, it's reminiscent of family and neighbors gathering on a front porch to enjoy each other's company at a slower pace... a place where we know what's really important. As  you look ahead to the weekend, plan a get-together with friends in your backyard and crank up this album.

I'm tipping my had:

Here's a video from the MORNING LIGHT LP:

You can catch up with Brandon on the following SM platforms: