A legacy for me is being a piece of the soundtrack of someone's life. ~ Brett Eldredge 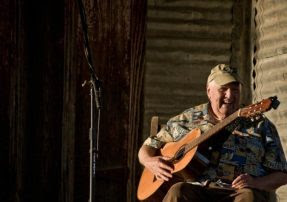 I can’t remember a time where I’ve enjoyed a CD enough to want to download every track from. Being old school, I prefer an actual CD to a download but this compilation of some of Tim Henderson’s work needs to be carried with you everywhere, traveling from place to place experiencing the nuances embodied in his lyrics. 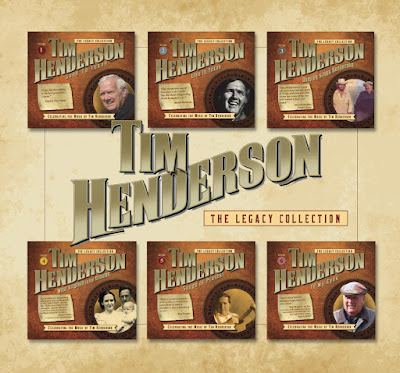 As I sat listening to the various tracks from the 6-CD The Legacy by Tim Henderson I heard a myriad of influences such as Woody Guthrie and Pete Seeger as well as his ethnic heritage. That fun, folksy frolicking tune as well as a solid storytelling ballad with at times an undercurrent of blues that helped make up the lyrical fabric of our country.

This CD collection is appropriately named ‘The Legacy Collection’ for that is what this is… Tim’s legacy for others to enjoy, to learn from and to emulate. While I’m not sure if the latter is the case, I hear his influences in other artists’ music such as Mike Blakely, Thomas Michael Riley. Gary P. Nunn and Ed Harris. A perfect example is included as a part of this boxed set with the incomparable addition of the late Allen Damson covering some of Tim's tunes on Volume 3 - woven seamlessly into this colorful quilt of Americana. The coolest thing is that I don't believe Tim set out to leave a legacy so much as he was just doing what was in that big heart - sharing what he loved with others, in hopes they would have the same passion for life.

Whether you love a strong Irish tune, a folksy ballad or a bit of the blues, The Legacy Collection - 87 tracks  in all - offers all of this and more that while spanning times past, will live on in infamy.

Of all the quotes I’ve received this week, or read elsewhere, the following is one that fits best with this album:

“Tim had the IQ of a genius and the heart of a poet. He could discuss 500 year old European music or describe a blade of grass he saw in a West Virginia holler as a boy. These things alone would make him a pretty rare character, but he was also one of the few people you meet in life that can really make you laugh. I once heard a young lady that had just met him say in awe, 'What a beautiful man.' Indeed.” ~ Chuck Hawthorne

For the genius in the storytelling, and the warmth of his heart, I’m tipping my hat…

To add this collection to your music library, click on one of the links below.

To learn more about Tim Henderson, visit his WEBSITE.