One of my most recent ‘finds’ is Thomas Michael Riley. I’ve featured Thomas here during the TMA Awards. Tommy’s a nice guy and it’s easy to see why he and Mike are good friends. You will often catch the two of them on stage somewhere in Texas. So it came as no surprise to me when Thomas Michael Riley and Mike Blakely teamed up for their most recent collaboration –
Live From Luckenbach. 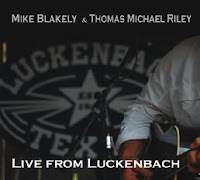 Live From Luckenbach gives us 15 tracks of great music with some ‘visiting’ mixed in. With an awesome sound system, you’ll feel as if you’re tilting that hard-rail chair back with a cold one in your hand watching these guys entertain you. You’ll enjoy some of your favorites such as ‘Charlie Siringo’ or ‘Ride the River’ and maybe some you’ve not heard before like ‘Tequila Memory’ or ‘In the Garden’.

In my review of Mike’s new CD I told you about the FREE instant download from MyTexasMusic. Live from Luckenbach is the first CD to have this special feature. So head on over to http://www.mytexasmusic.com/thomasmichaelriley/ and get your copy.

Lucky Boyd calls Thomas Michael Riley and Mike Blakely ‘legendary’. I have to agree. These two down-to-earth boys are what good Texas music is all about.

Thanks for a great CD, guys!
Country Blessings!
Posted by Kelly at 6:54 PM No comments:

Today, I’m offering up two reviews in two separate posts. They’re both brand new out of the chute with an awesome bonus, which I’ll tell you about in just a bit. But first, to the review.

It’s no secret Mike Blakely is one of my favorite Texas musicians. I’ve been waiting semi-patiently for his new acoustic CD ‘Homemade Serenade’. As soon as Mike told me it was available, I headed over to http://www.mytexasmusic.com/ and clicked the order button. And that awesome bonus I mentioned – Free Instant Download of the album in MP3 format with purchase! No waiting for the CD to arrive to listen to it. Leave it to MyTexasMusic to give us a little something extra for our hard-earned cash.

Oh.. the CD… Homemade Serenade is done in true Mike Blakely flavor. Beautifully done and reminiscent of his 1994 CD Ride the River – (an album that won Album of the Year and a Songwriter of the Year Award for Mike in 1998 from the Texas Hill Country Music Awards).

With cuts like Ode to Blue, That’s the Way I Feel and the title cut Homemade Serenade, it appears as if Mike has come home. I can picture Mike sitting on the front porch of his home on the Seven Stars, stocking-feet tapping to his guitar strum putting these together. But don’t let those soft songs fool you. Like Here’s to Horses (from Mike’s West of You CD), there has to be a little humor and he delivers with his dream to St. Peter in
St. Peter’s Day Off and Jesus and Juan. One other song really catches my attention –
Luckenbach Blue Moon New Year’s Eve.

If you don’t have plans for this New Year’s Eve… you might want to make reservations to hear him play this one in person at the Luckenbach Dance Hall. I hear the tickets sell out fast so plan ahead by going to http://www.luckenbachtexas.com/

Thank you, my friend…
Country Blessings!
Posted by Kelly at 6:01 PM No comments:

Last week I ordered two new CDs (which I’ll be posting reviews for next). As a result I’ve been emailing back and forth with Jinelle Boyd. One of the emails I received from Jinelle this past week was to let me know that The Country Angel blog is the Recommended Blog of the Week at MyTexasMusic!

Recommended Blog:
We love The Country Angel Kelly Henkins' blog, and you will too! Give her a visit at:
http://kellyscountry.blogspot.com
Refreshingly honest point of view, great reviews...check her out today!

Please take time to stop by www.mytexasmusic.com for a look around. Everything on MyTexasMusic is on consignment directly from the artist. Jinelle and Lucky take care of all the business so these talented artists can spend their time doing what they love – performing and recording.


Thanks, Jinelle
Country Blessings!
Posted by Kelly at 5:17 PM No comments: