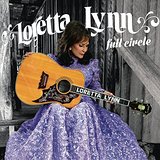 From the opening dialogue between Loretta Lynn and co-producer John Carter Cash introducing Whispering Sea to Lay Me Down (w/ Willie Nelson) FULL CIRCLE is Classic Country at it's best. Her daughter Patsy Lynn Russell also held part of the production reins.

A compilation of original music and covers, FULL CIRCLE will carry you to the front porch of Loretta Lynn's home in Hurricane Mills. You feel as if you are sitting in one of the rocking chairs listening to her melodic voice carry 'cross the holler. This is Loretta Lynn's first album in 10 years yet her voice is as clear and strong as her first release over fifty years ago.

The album, recorded at Cash Cabin Studios in Hendersonville TN is a step back to the way Country Music used to be... music we can not let go of.

The first thing that caught me about this CD was the cover. Vintage rose-patterned wallpaper inspired, to the rough barn siding of a cabin firmly grounds us in Loretta Lynn's roots... where her music came from. She is photographed in a beautiful gown... a style that has become Loretta's signature style throughout the decades.

The one surprise on this album is Everything It Takes (featuring Elvis Costello) Whether this was an attempt to bridge the geneation(s) gap of faithful fans to new or just an artists ear for recognizing talent, regardless of the genre, the pairing works well and opens up new roads out of Hurricane Mills.

Here's a sample of what you will hear on FULL CIRCLE:

You can follow Loretta Lynn on the following links: