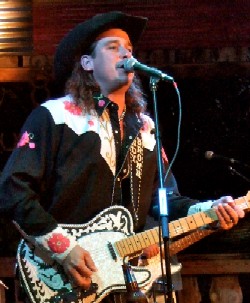 There's a reason Randy Brown is one of the nominees for Entertainer of the Year. He's THAT good!
Randy first appeared on the Texas Music Awards nominee list in 2007 for Record of the Year (Hard Face to Face). In 2008 he jumped out of the gate strong with FIVE nominations - one of which he won - Male Vocalist of the Year. And if you've not heard this man sing... yeah, there's a very good reason he won!
Over the course of 2010, 2012 and this year (2013), Randy has held four other nominee positions - twice for Record of the Year and for Entertainer of the Year.

Texas born and bred, this Fort Worth man grew up absorbing all the flavors of honky tonk, true Texas country as well as western swing.Whether performing acoustically or backed by a full band, Randy Brown delivers a quality performance everyone will enjoy. His wide range of vocal range and passion for good country music guarantees his ability to target all of his listeners at some point.