ENTERTAINER OF THE YEAR nominees


Okay... so somewhere along the line I missed a day this week. LOL So today I'm shining the spotlight on the last two nominees for Texas Music Awards Entertainer of the Year. 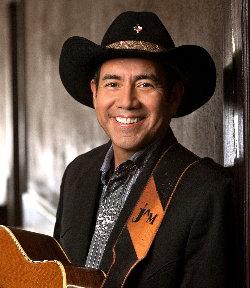 john Arthur martinez- jAm to his friends - is one of the most easy going/ hard working/ down to earth people I've come across in this business so far. Then we add he is humble and diplomatic and a family man. Is it any wonder he is in this category alone for the FOURTH time, first winning the award back in 2006.

jAm has been on the nominees list for various awards nine times counting his three nominations this year. A quick recap, those three would be: Song of the Year for Tennessee Left Texas, Popular Cover Award (for his rendition of the Merle Haggard classic, Sing Me Back Home) and Entertainer of the Year.

Pauline Reese is one of my favorite ladies in Texas Music today. Why? Because this woman personifies the 'I Can Do It All' attitude. She is a doting mother, a country wife, a talented singer, songwriter, performer. Geez. The woman can cook, garden, take care of the critters and love on her babies... all while fresh lyrics run through her head. When we chat on twitter, I can hear the 'happy' in her voice. I can't wait for the day when we actually get to sit and talk.

In the mean time, let's talk about her music accomplishments as they relate to the Texas Music Awards. Since her debut on the Awards list in 2006 when she debuted as a nominee for Record of the Year with Cowboy Way - The Good, The Bad and the Ugly, Pauline has been nominated NINE times. PLUS in two different years (with 2 separate producers - John Burris and Justin Pollard) her albums resulted in Producer of the Year nominations for John and Justin respectively. John for 'TOO TEXAS -Live at Cherry Ridge" and Justin in 2012 for "Just Getting Started".

With all those nominations, she has three wins to her credit... including the honor of being the first FEMALE Entertainer of the Year - (2010)  Tomorrow, Pauline Reese will serve as Grand Marshall in the Texas Music Awards parade through Linden.

Linden TX is going to be one happening town tomorrow. Wish I could be there. Will you? Please stop and leave comments for any of our artists. I should have the complete Winners List posted Sunday morning.

Congratulations to all the nominees and Good Luck at the Music Barn and the Texas Music Awards!
Country Blessings - Kelly