OUT OF THE CHUTE - Aaron Tippin 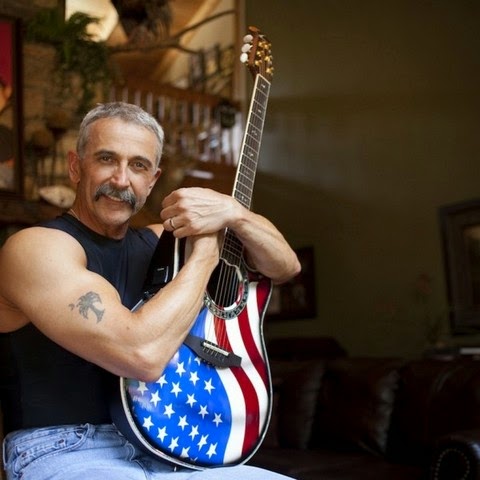 Since 'There Ain't Nothin' Wrong With the Radio' rattled the speakers in my car in 1992 I have been a fan of Aaron Tippin. I had followed his career since 'You've Got To Stand For Something' the year before, but that snappy little tune about his car 'Daisy' just clicked. Aaron Tippin has a sense of humor and it shows in his songs.

So when I had the chance to sit down with Aaron on July 4th, I was thrilled. I'd met him several years earlier for a charity opportunity but this time we got to talk. Here's some of what he had to say.

Note: some answers have been abbreviated as some of the content will be used in a 'first rights' article in the future. This is the short 8- second ride.

1. In your bio on your website – when talking about ‘In Overdrive’, you mention ‘real country music’. What is your definition of ‘real country’?
The songs rule. What turned me on to country music was the great stories from artists like Hank Williams, Sr. It’s not necessarily the instruments that play it, it’s the song

3. You’ve been a guest on Country Family Reunion. Was it important for you to be a part of the program? And if so, why?
Just cause I get to hang out with my heros. (laughs) that’s as simple as I can put it. I get to sit there with Bill Anderson and Jim Ed Brown and all the guys that are still left. They knocked down the big dream. I’m just thrilled. Same way about going to the opry. I don’t care if I play or not. As long as I can stand back there and watch.

4. In a recent interview with Lance Yelington with CyberCountry.com, you were asked about your opinion in the way you feel things (music) are going. You said you try to focus on what you do and not what everyone else is doing. What brought you to the point of going from a label to an Indie artist?
You know, I think whether it’s good or bad, not being able to steer your own ship. I just wanted to do that. I’m thankful for all the hard work the guys at RCA did, promoting my music, but I was just ready to do what I wanted to do and not go to the studio and be worried, you know, having a record exec pacing the floor making sure – ‘don’t do this’, ‘ you gotta do that’, … radio play’. It’s a bunch of cant’s and don’ts instead of just walking in there and say ‘hey.. here it is boys. Let’s go out there and play it. Just make it…

That’s like Overdrive. There’s nothing new about those songs. But it was the opportunity for friends, and myself, to get together and play in the studio with nobody breathing down our neck. And nobody saying ‘we gotta do it like this’, ‘not too much of this’… we just went out there and played and had a great time. You know, you listen to that record, there is so much life in those tracks. It’s cool, it’s fun. We just had a ball doing it.

5. I’ve read you write from your heart and will spend hours searching for that opening line. I believe that makes the difference between a really great song and just something to fill a playlist. All of your songs seem to come from experiences – as a regular joe.  Is there anything that is personal to you that you won’t write about?
No. I do it all the time. If I feel it, it’s in me, it’s going to come out of me. All the stuff I’ve written, have had success with, it’s about me.

6. You’ve worn a lot of hats in your lifetime. I have always been impressed by your determination to be just who you are. You don’t try to follow the flow or be someone labels might have tried to impress up on you. Describe Aaron Tippin in 5 words or less.
I am just me.
I can’t be anything else other than what I am. Believe me, they tried to whitewash me a thousand times. I’m always start showing through in the same places.

7. How did you become interested in having your own winery? What types of grapes do you grow and is the winery for private use or are you commercializing?
My wife’s dad turned me on to wine drinking. I was a beer drinker before that. I was meeting her family, and I up and ordered a White Zinfandel. That embarrassed her dad. And her grandmother. And so he reached over to me and said, ‘Aaron, men at this table drink red wine. I’ll order your wine for you. He ordered me a glass of Red Zinfandel and I loved it. I might have had another two beers. That was it. I’ve never been back. I just love it.

The grapes we have are Muscadine. They’re a native grape. There are no grapes in the south east, no grapes on the east coast to make good reds. So we do fruit.. you know, country wines like peach and I’ve made wine for years. We do sell off the grapes but most folks make jelly

I was for a long time… I’d go out to California and barrel select something I wanted. We're just too busy. Since I've gotten back into the airplanes, we just don’t have much time to do anything else.

Then I had a brain storm ‘you know what would be cool if I build something or had a toy’ So I came up with the idea of putting a bike together. I think I thought about a doll house, and other stuff.. but it had to be something reasonably simple I could do in 3 minutes and sing while I’m doing it. So we still do it.

Come back tomorrow for my review of In Overdrive. If you like trucking songs, you'll LOVE this album from a guy who knows what it's like to be behind the wheel!

In the mean time, you'll find Aaron at various places on the web:

Labels: Aaron Tippin, Out of the Chute